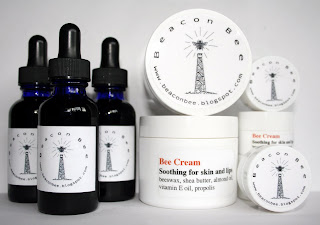 We are in full production mode here on Sunnyside Road!
I currently have two wonderful products for sale.
Bee Balm, made from beeswax, shea butter, almond oil, propolis and vitamin E oil
This is a wonderful, thick, but not heavy, soothing and healing cream for both your lips and skin. I have found it to work wonders on chapped lips and cracked skin.
Bee Balm is available in both unscented (a lovely aroma of the natural ingredients) and lightly scented lavender.
Once ounce jar $4.00
Three ounce jar $10.00.

I also have Propolis Tincture. Propolis tincture can help to ward off or shorten the length of a cold, sore throat or flu. Propolis contains a high concentration of flavenoids, which have been shown to have antibacterial, antiviral, antioxident and immune stimulation effects. Honeybees collect plant resins and bring them back to the hive. They then add beeswax, honey and enzymes, transforming it into propolis. Bees use propolis like caulking, filling cracks and gaps in their hive in order to protect it from disease.
One ounce bottle: $12.00
Two ounce bottle: $23.00

If you are interested in purchasing something, please send me a comment, or email me directly at ddavidovits@optonline.net

Deb's mom says "Hi Deb, I used your tincture yesterday because I woke up sick. Much better today... It really works!"
Posted by beaconbee at 8:49 PM 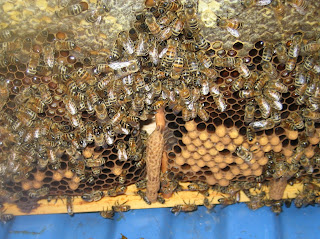 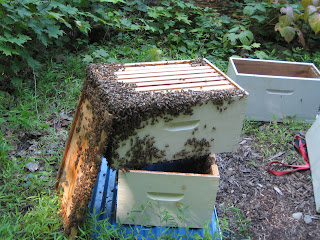 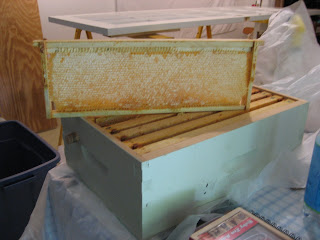 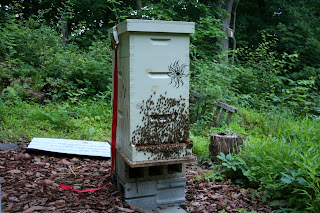 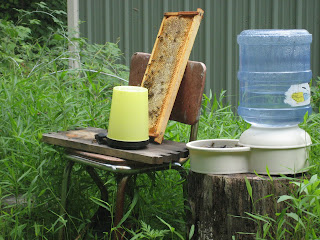 I'm back and so are the bees. The winter was good to the bees. Not too brutal and I had left them with more than enough honey to make it through. This spring I got a second hive, which I will refer to as the lower hive (for now) as it is geographically lower than the upper hive (the hive from last year). The major excitement so far, has been the anticipation of, and witnessing of my first swarm, which occurred yesterday! I had seen queen cells being grown a few weeks ago and have had my eyes out since then. The queen cells are the longs things hanging off of the bottom of the frame. The hive grows a new queen for one of two reasons. Either the old queen is dead or not producing well (laying good and plentyful eggs), or because the hive is overcrowded. I had added a super, but apparently not soon enough to suit them.
The past few days I had been hearing the strangest sound from inside the hive when I put my ear to it. A rhythmic, high pitched "weep-weep-weep" sound, which I read is called "Queen piping, or tooting". It is the sound of the new queens communicating with the hive, sometimes from within their cells before they even emerge. It was quite surreal and reminds me of just how odd and fantastic this whole beekeeping thing is. Once the queens emerge, they duke it out with each other until one rules supreme. The old queen then leaves the hive with up to half of the bees to start a new hive.

Yesterday at around 10:00a.m., I was out on the patio and I must have sensed them, because I looked up just as a cloud of bees was forming high up in the bee yard. I grabbed camera, boots, phone and ran up. Creeping through the woods, I could feel their presence and could hear a dull, deep whirring sound, but could not see them at all. I moved slowly through the trees with them and finally they popped out to where I could see them.

I ran down to the house and brought up the spare "bait hive" (an empty hive box with old comb in it) that I had prepared for this occasion. I set it down at my feet and beat out a slow rhythm on my bucket, something I had both read about and heard from Chris. And boy did I feel odd! Luckily, all neighbors seem to have been away for the afternoon. I beat, I sang, I beckoned. All to no avail. They settled on a dead branch 75 feet in the air. Much too far for me to reclaim them. From here, it is the drones' job to scout out a new location and report back to the group. The drones do a dance to convey what they have found and how prime a spot it is. Based on the enthusiasm of their dance, the group votes on where to set up house, and off they go. I had to go out for the afternoon, and Matt reported that by 3:00, the group was gone. Click on the images to see the bees up close! Posted by beaconbee at 4:48 PM