Dear reader,
Up until recently, I have been keeping this blog AND keeping a beekeeping journal and have been finding much redundancy, so I have decided to keep this as my beekeeping journal. What this means for you is more details about things that you might not care too much about. Feel free to just look at the photos and say "oooh"and/or "ahhh" and skip the words if you feel overloaded. I will try to keep including some interesting factoids here and there, like the fact that a worker bee can locate where the sun is even during the nighttime. As always, feedback is welcome.
I went up yesterday with the intention of venturing into the first deep, a place I have not been for many months. A local beekeeper convinced me that I needed to make sure that all was well there, but having gone in, verified what I already knew, (that everything was fine), made a mess, killed a lot of bees and gotten stung, I stick to my original belief that it was unnecessary.

Before going in, I noticed this row of workers, all head down lined up on the front of the hive. 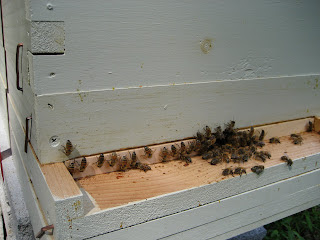 The first deep has some frames loaded with worker brood (no drones this time of year) while other frames have vast areas of empty cells. This makes me nervous (it all makes me nervous) but is probably not a problem. I saw larvae in various stages, but no eggs, which does not mean that there aren't any, just that they are hard to spot. I did not go into the second deep or into the honey filled super. The new super has almost nothing drawn on it yet, which makes me doubt that they will have time to draw comb and fill it with honey before the season ends. So, perhaps I will not be harvesting this year after all. We will just have to wait and see.
I got stung on my left index finger and for the first time put on the super cool elbow length leather gloves that I ordered in the spring. I am willing to get stung once per visit, but that is my limit I am afraid.

Here is how the hive looks now, fully stacked. The red strap is in case a bear knocks the hive over. 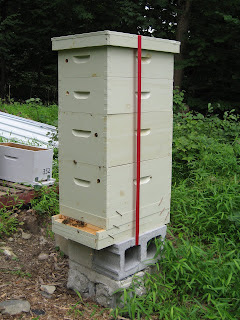 Posted by beaconbee at 8:08 AM

An active few days at the hive.
After not going in for a month, I knew that things would be a bit of a mess in there, and I was right. I went up yesterday but did not go in because of some interesting but off putting activity. Hundreds of girls were hovering in mid air in front of the hive, all facing the hive, occasionally landing and then taking off again, only to hover some more. Speaking with Chris today (bee teacher) he explained that this was a "graduation flight", meaning that the girls who were about to become foragers were leaving the hive for the first time and orienting themselves so that they would be able to locate the hive again. I feel so lucky to have witnessed this! The other strange thing that I saw was the presence of MANY drones on the entrance board. Usually I might see one or two, this time I saw up to a dozen at a time. The girls were kind of nudging them to the edge, at which point they would fly away. I realized that I was witnessing the beginnings of the expulsion of the drones. With the cooler weather coming, the girls cannot afford to feed any extra mouths and the drones are all kicked out by the fall. Today, the hive was very calm and with Matt agreeing to be my smoker and photographer, in we went. This first photo shows a ton of propalis that the girls laid between the outer and inner covers of the hive. A beautiful bee painting. 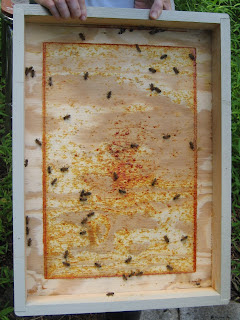 There was a ton of burr comb between the super and the second deep and as I separated the two boxes, very mature larvae were exposed as the burr comb was ripped apart. Their bodies are all white, but their huge eyes were a strange purple. (click on the photo of me scraping burr comb to see this) I felt so bad destroying them and know that if I had come in sooner they would not have been let to develop this far.
As I scraped off the burr comb, I tossed the chunks onto the ground in front of the hive so that the bees could find it and eat what they wanted of the high protein larvae. All through this, the girls were docile and pretty much ignored me. Some days feel calmer than others at the hive, and luckily this was one of them. 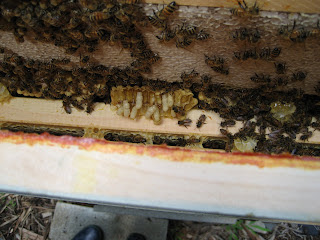 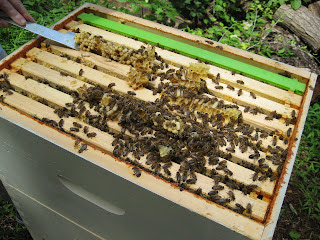 I was thrilled and amazed to see that the frames in the super were 90% FULL of capped honey!! It is one thing to read about it in books, and yet quite another to see that it actually happens. Similar to Sammy learning to walk and talk, it seems obvious that given the right circumstances it will happen, but none the less miraculous when it does.
Many of the brood frames however, contained very little capped honey, which concerned me because this is what the girls will be living off of for the winter if I take the honey super away to harvest it. I saw lots of capped brood and uncapped larvae but no eggs. This is frustrating as I cannot verify that there is a queen unless I see her (yet to happen) or eggs, but I really did not want to delve into the first deep as the girls were getting restless, buzzing my veil and buzzing Matt. 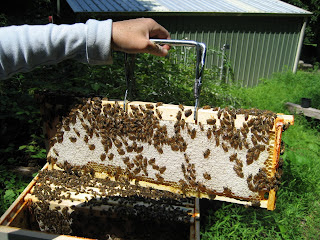 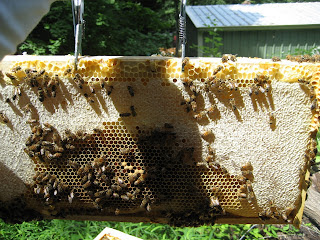 After I put the hive back together, I called Chris and he told me to put a second super on so that the girls can continue their work with more space. The purple loose strife is just now in bloom, resulting in near black colored pollen and "coca cola" colored honey. After doing this, I walked toward the house and breathed a sigh of relief that I had avoided getting stung after such an invasive inspection. Apparently I spoke to soon as I felt the sting on the back of my hand from a lone lost girl who had gotten trapped in the cuff of my shirt. Today my right hand is swollen like a rag doll's. It cannot dampen the excitement I feel at the prospect of actually harvesting some honey in the next couple of months though. 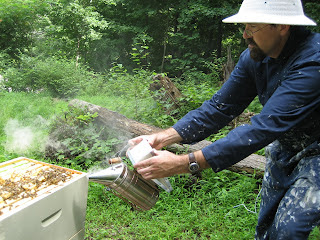 Posted by beaconbee at 8:22 PM