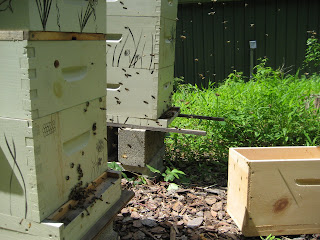 First, the beautiful sight of an orientation flight, (a.k.a. joy flight or play flight) that occurs when a group of girls (about two weeks old) is ready to take on their final job of forager. Before doing so, they leave the total darkness of the hive and do a hovering type dance while facing the hive, gently moving up and down in front of it. It is their way of imprinting their hive on their brains. "This is what it looks like, this is what it smells like." They will do this for a few days in a row before finally leaving to forage. The dance lasts about ten minutes and tends to occur in the mid afternoon. 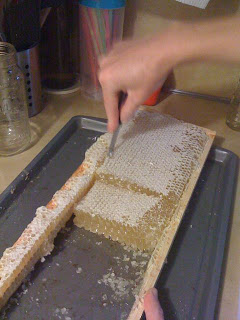 Honey: I harvested about 35 pounds of honey from the first super that I pulled. It is a very time consuming process because I don't have an extractor and I am saving the beeswax for use in my Bee Balm. I work one frame at a time, crushing, straining and finally bottling it. The result was an amazing, light in color, flavorful honey, and the bottles lined up on the window sill fill me with awe. 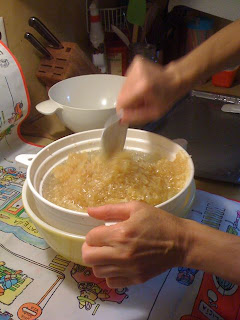 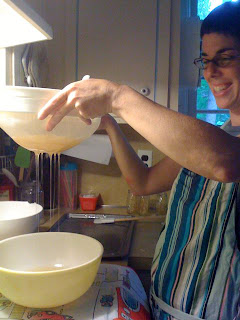 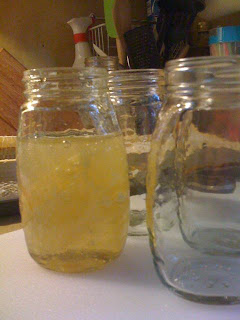 Ants: I have known for awhile that black ants had taken up residence under the bottom board (the board of wood that sits under all of the boxes) of the House Hive. They would scurry out, carrying their eggs and larvae each time I would check the observation tray, and I was hoping that they could peacefully coexist. I have noticed lately though that the girls have been bringing in great big globs of propolis and doing something that has been causing it to drip down into one particular corner of the tray. This told me that there was something in there that they were trying to get rid of. (They have been known to coat a dead mouse in propolis if it is so bold as to try to build a nest in their hive.) I went in today to find out what was lurking in there.
I have learned that if I want to see what is going on in the bottom box, I had better not even peek in the upper boxes first, or I will be exhausted and the girls will have no patience for me by the time I work my way down there. So the boxes: three supers and one deep got stacked on top of each other next to the hive. Removing two frames, I could see that the girls were laying propolis into the holes of the screening that was separating them from the ants. Even though the ants could not get into the hive, they were clearly too close for the girls' comfort. 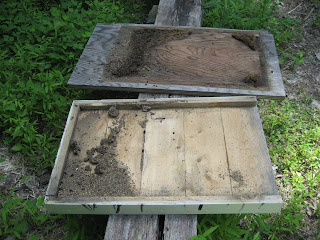 So... to think on ones feet, amongst thousands of whirring bees.
I removed the deep from the bottom board and exposed a huge nest of big black ants. I removed the bottom board to find even more ants, wood chips, eggs etc. under it. I moved both boards away from the hives, and wondered what to do next. Meanwhile, I saw that the girls REALLY did not like that I had moved their bottom most hive box. It would be as if you went out to get the mail and when you turned back to go inside, your entire house had been moved 6 feet to the left and sideways. Very disorienting to say the least. Girls were everywhere and I noticed that they were starting to move in on the Woods Hive!
I quickly looked around, pulled out two stakes that were supporting the wild blackberries and lay them on top of the cinder blocks to act as spacers between the blocks and the hive. This would allow me enough space to slip in the observation tray, but would not offer the ants a wood surface to call home.
I moved the bottom box in place and the air calmed down.
The rest of the inspection was smooth. I saw capped brood, a bit of larvae, honey, pollen and best of all freshly laid eggs. I know that the hive swarmed (again) in mid June (the population is about half of what it was) and eggs are the only way to know that a new queen is present and doing well. I moved frames around a bit so that I have another box full of capped honey on the top of the hive, with the escape board under it. 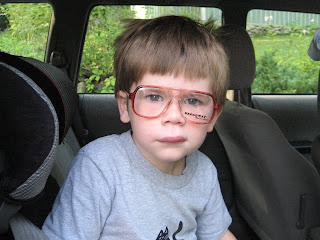 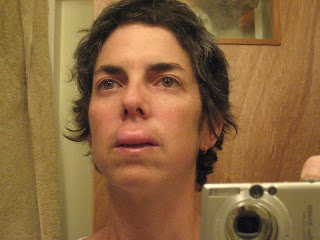 Going back up to the hives in the evening (in order to treat the Woods Hive for varroa mites), I was mistaken for a bear and stung squarely on the upper lip. Note the similarity to how Sam looked last year at this time (also note the super cool glasses that completed the look).
The swelling went down before Matt could make me a suitable giraffe costume.

A few days ago I got an email from Khalil Hamdan, a beekeeping teacher who lives in Holland. He asked permission to use an image of my hives for an article that he is writing and so I did what we all do these day, which is Googled him. What I found is a series of clearly written and interesting articles about various aspects of beekeeping. I learned some fascinating information about Bumble Bees! I will post a link on my blog.
Posted by beaconbee at 2:35 PM