This past weekend I felt confident enough that the girls had enough stores to last them till spring that I finally harvested the four frames of honey that I pulled last October. My studio is the closest I have to a "honey house", so if you notice flecks of wax or honey on my drawings the next time you see them, you now know why. From the four frames, I bottled a total of twelve pounds of honey! (Honey is measured by weight, not volume, and an 8 ounce glass jar of honey that you buy in the store actually contains 6 fluid ounces of honey.) This batch is very light in color, and has a nice fairly mild flavor. Sam visited me many, many times, as I had told him that he could have a taste each time that he visited. It was interesting to see that as I cut into the frames, I could see the color of the honey change slightly as the crop changed. I hung the rinsed frames out under the front deck and being that it was a pretty warm day (around 55 degrees), they were soon discovered and enjoyed by a few dozen girls. I noticed that most of the girls that I saw had all black abdomens (the hive often times contains multiple breeds since the queen has mated with about a dozen different drones). These are probably Carniolan bees, originally from eastern Europe I think. 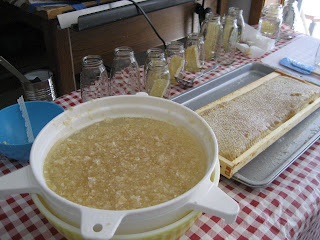 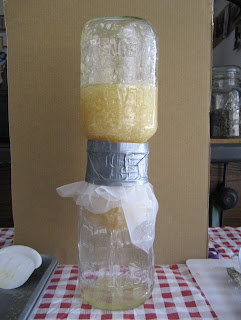 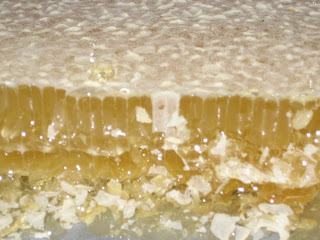 Today I went up to check the observation board which sits under the hive, and found.... POLLEN!! This week has been too cold for them to have been out and about, so this must have been from March 7th or 8th when it was warmer. The earliest trees that produce pollen are Willows, and the color I am seeing matches that, but there are NO willow trees in our neighborhood. It was thrilling to see this clear sign of spring. Also on the board was a lot of wax cappings showing that they are still consuming a lot of honey. This makes sense as they are busy raising their brood at this point. My new beekeeper's jacket came in the mail!
Posted by beaconbee at 8:13 PM