Zen and the Art of Beekeeing; The Close of Season 3 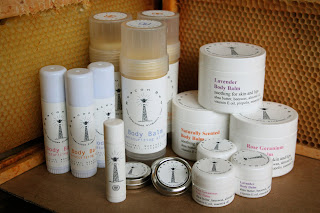 Featuring the complete line of Beacon Bee Balm! Selected products are available at DIA Beacon, Homespun, Beacon Natural,
and coming soon to a new store; Wing and Clover in Rhinebeck.

After a month of temperatures that veered wildly from the 30s to the 60s (sometimes in the same day), the chill seems to be settling in for good now. This has meant winter preparation for me and the girls, with my focus on moisture control (sounds exciting, right?). The girls know how to cluster, maintaining a temperature of between 92 degrees (at the center of the cluster, where the queen is) and 74 degrees (at the outer edges of the cluster). Just inches from the outside of the cluster, the temperature is close to that on the outside of the hive. Because of this internal heat production, hot and humid air rises in the hive and condenses when it reaches the cool upper levels. If this cold water collects and drips back onto the bees, they are doomed. For some reason, maybe because we are on the side of the mountain and have more of a temperature fluctuation than most areas, my hives have major moisture issues. On mixed temperature days this past October, when a cool night followed a warm day, I could see the water dripping out of the hive entrance the following morning. I am thinking now that the mold that I found in the bottom box of my hive this spring was probably due to this condensation.

So, I put out my feelers for advice to a few bee experts, and got a dozen or so suggestions. I took from them what made sense, added what I knew from my own experience, and came up with a system that I feel optimistic about.
For the two or three beeks (yes, it stands for bee geeks), that are still loopy enough to be reading this post, my solution is as follows: 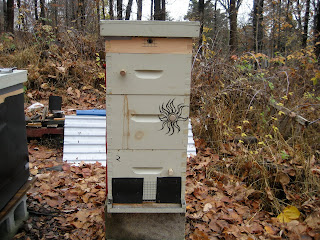 On top of my super that is full of honey, I put an empty half medium super. (Matt was kind enough to saw one in half on his table saw). On top of that, I put a shim (a perimeter of wood) which is about two inches high. Stapled to the bottom of the shim is a sheet of 1/4" hardware cloth (metal mesh). On this hardware cloth I can lay down sheets of newspaper, with a lozenge shape cut out of the center. The outer cover sits on top of the shim. (no inner cover!) I drilled a 3/4" hole in the front of the half medium super, for ventilation as well as a second entrance.
So; the moisture rises, gets absorbed by the newspaper and has air above it and below it so that the newspaper does not get moldy. Periodically I can go in and replace the paper. 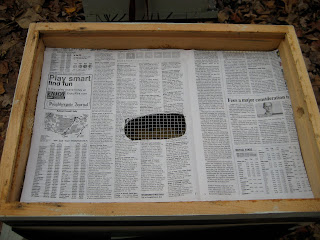 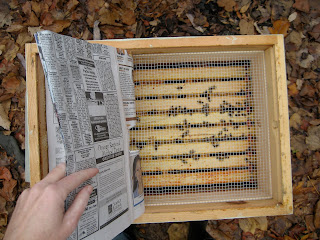 The last thing I will did is wrap the hives with tar paper. This will not offer much in the way of warmth, although the black will help draw in the sun. Its main purpose is to block the wind and keep it from getting into the cracks between the boxes.

This fall I have treated both hives numerous times (with Oxalic acid) for mites. Levels got really high in September and it was only this last treatment, at the end of October, that caused a tremendous mite drop to occur. As you can see, they formed a sheet of parasitic disgustingness the day after. This continued for a few more days. Now that I know that there is no brood being laid, I should be able to get away with just one more treatment. 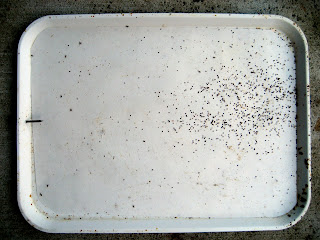 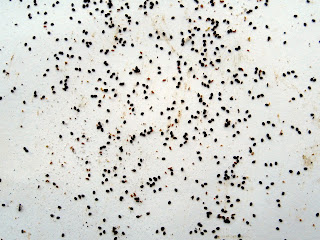 I would of course prefer to be "treatment free" in my beekeeping practice, but because I only have two hives, I am not ready to totally let nature take its course. In times of adversity, we are pressed hard between our ideal of how we would like things to be and the consequences of pursuing that ideal.

And so the season closes with two very different hives, one small with lots of stores, the other bigger with hopefully enough stores. My hope is that both hives get through the winter. If they do, I may split one and start a top bar hive in the spring, although two hives keeps me busy enough as it is. 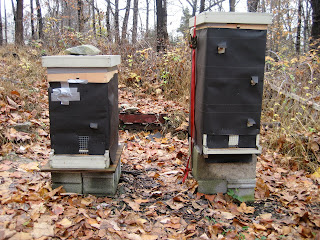 I feel that this was the season where I learned to trust myself as a beekeeper. This did not mean that I did not make mistakes, but I found myself able to make sense of most situations and act accordingly (without reaching for the phone each time a bee buzzed in an unfamiliar way). In late spring or so, when I found myself getting overly anxious about the plight of my new nuc, and the never ending stream of ants going in and out of the bottom board, I realized that I could not continue to pursue this if it was causing me such anxiety. I had to let go a bit and feel comfortable being an observer as much as a keeper. 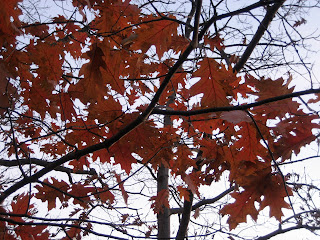