A Swarm in July isn't Worth a Fly

This years girls are incredible. Kind, gentle, healthy and productive. Throughout the spring I had been adding supers sooner than usual in an effort to stave off swarming, and the hive quickly grew to be as tall as I am. 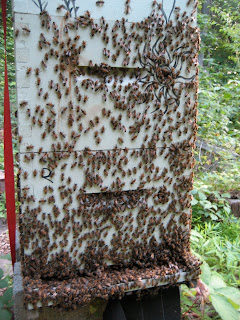 I thought that I had succeeded in keeping everyone at home, but the dramatic difference in what I saw upon returning from California last week told me that despite my efforts, they felt the need to divide and move on. As you can see, July 20th shows many more bees than July 31. A swarm this late in the season can mean trouble if they don't have enough time to build up their population to go into the fall with. Also, if the new queen does not take, they won't have enough time to make a new one before the fall. (Insert the sound of nails being chewed on here.) Going in this morning, my guess was confirmed. Lots of empty queen cells along the bottom edges of the frames told me that the queen has hatched and is (hopefully) in there somewhere. The earliest I can expect to see eggs or larvae would be in about a week. That would reassure me that all is well. Until then, I must sit tight and think good reproductive thoughts.

A swarm in May is worth a load of hay, a swarm in June is worth a silver spoon, a swarm in July isn't worth a fly.
It is true that July is late from a beekeepers perspective, but adding a new colony of bees to the natural world is always a good thing. If you find them in your backyard, send them my love. 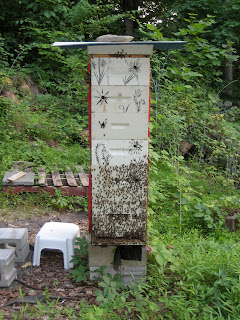 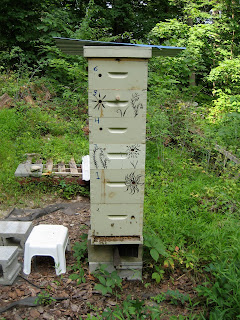 Speaking of California, my heart leaped (no really, my heart does leap at things like this) when I saw that the feral hive in Golden Gate Park was still alive and well. (Die hard blog followers will remember these girls from last year's visit out west.) I can only hope the the girls who swarmed from my hive find as nice a home as this one. 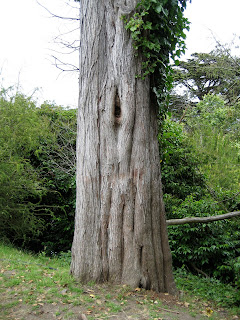 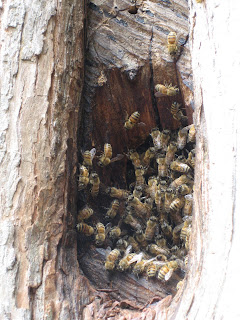 The spring harvest was bountiful. I pulled a full box of capped honey at the end of May, which yielded about 35 pounds of flavorful honey, deep cinnamon in color. I left three more full boxes of honey on the hive, which I can pull once I know that the season is leaving them with enough for the winter.
The following images show the process of extracting the honey from the frames. I don't use a mechanical extractor because I need to save the wax for my bee balm. This "crush and strain" method is a sticky, time consuming mess, but the end result is worth it.
A full frame of capped honey 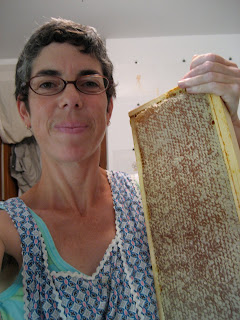 Cutting up the frame 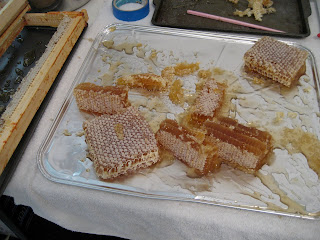 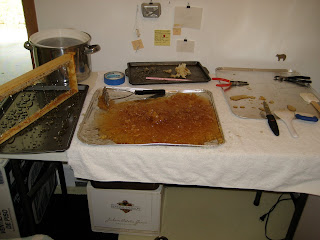 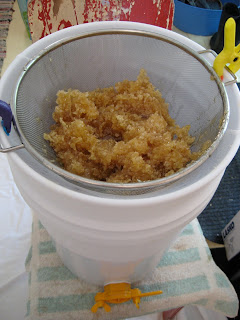 Given that it was over 100 degrees out, I thought that I might be able to melt down my beeswax using the sun rather than my stove. I have not yet made myself a solar wax melter out of the traditional materials (a wooden box lined with metal covered by a sheet of glass), so I had to make do with what I had around. 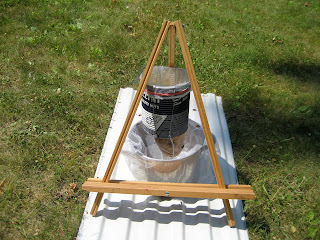 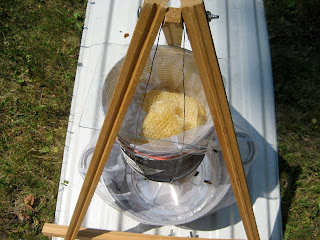 After several hours..... nothing had melted. I attracted the attention of several hundred bees though, and so I ditched the tin can and let the girls suck out what they could from the sack of wax. This ended up being a very effective way of extracting the last remnants of honey from the beeswax. 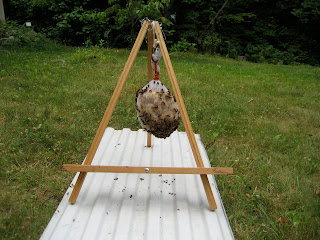 The Bee Balm King at work 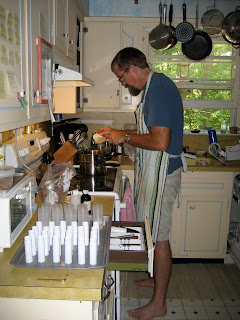 Keep an eye out for notice of our new website, beaconbeebiz.com
It is not quite ready yet, but will be quite sweet when it is up and running.
Posted by beaconbee at 11:32 AM