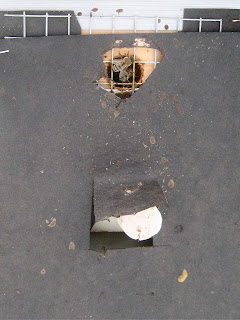 Last week the temperature rose enough for me to be able to pop the lid and take a peek into the hive. Based on the poop and smattering of dead bees in the snow, I knew that they were alive, but I did not know if they had enough stores to last them through the next two months. 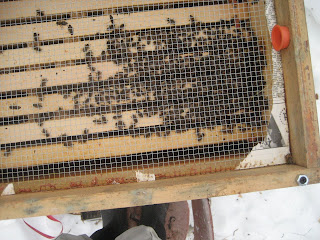 After dragging a stool over to the hive and planting it somewhat firmly in the remaining two feet of snow, I popped the lid and was immediately greeted by a blanket of live, warm bees covering the tops of the frames of the upper most box. They were not nearly as happy to see me as I was to see them, but I will not take it personally.

Looking closer, I saw with great satisfaction that they still have a full super of capped honey. I closed up the hive turned to the observation tray that sits under the hive. Pulling it out, I was stunned to finds thousands of bee wings and legs. Strange enough, but stranger still is that there were no bodies. How did this happen? My only theory is this: dead/frozen bees dropped off of the cluster and onto the screen that covers the bottom of the hive. As their bodies decomposed, their wings and legs filtered through the screen, but not their bodies. 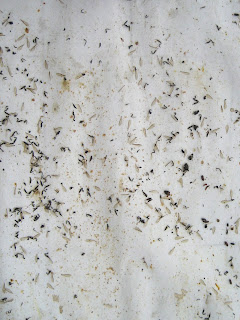 Always something new up at the hive, I say.
Posted by beaconbee at 7:55 PM 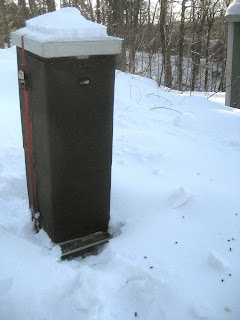 I am thankful for the warmer day or two that we have had over the past week. The long weeks of steady cold had me nervous, as the girls need days where it is over 45 degrees so that they can make their cleansing flights and rearrange the cluster. I left them with plenty of winter stores, but if they cannot get to the honey, it is of no use to them. Based on the dozen or so dead bees scattered in the snow and the brown dots of bee poop peppering the ground on the warmer days, I can safely say that there is some sort of cluster alive in there. 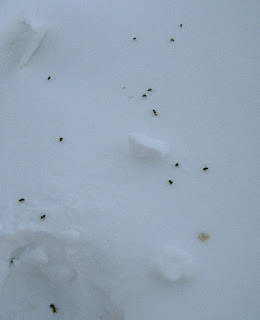 I had a dream last week that I was putting on a pair of black knit mittens, and something was inside the left mitten, stuck between the mitten and the back of my hand. It started crawling around in there and when it stung the back of my hand I realized that it was a honeybee. I carefully peeled off the mitten and the bee flew away. I saw that it had given me a few "warning stings", meaning that it had injected a bit of venom, but not deep enough to get her stinger caught in my skin. A few welts formed, but it was annoying more than it was painful.

When I remembered the dream the next morning, I said to Matt, "The bees were warning me about something, I have to go check on them this morning!" Then I thought to myself that this was probably a metaphorical warning, not a literal warning from the bees, but just to be sure, and even though I had just checked on the hive two days prior, I trekked up to the hive (over two feet of snow) before work.It was not until I got right up to the hive that I saw that for the first time in five years, snow had completely sealed up their entrance. I knelt down and dug out the snow and ice that was blocking their way out.

Sunday was the warmest day so far. Unable to keep away, some friends, Matt, Sam and I snowshoed past the hive on our way into the woods. A few of the girls were out, and perhaps seeing us as a warm resting post, they came over and landed on us as we walked by. I gently nudged a girl off of Shep's coat and onto my gloved fingertip. What must it be like for them, emerging from months of pitch darkness into this blinding winter landscape? Do they even see us through the glare, or do they just sense our heat and fly towards it?

As always happens this time of year, I miss them and long for the springtime when they will burst out of their hive. I am currently working on a new shadow puppet video, this one with the bees as its inspiration. The title is "When Winter Comes", in part because it would seem to me that from the day that they emerge in the spring, they are making preparations for the winter. Several months still lie between now and the first pollen of the willow tree and dandelion. My fingers are crossed. 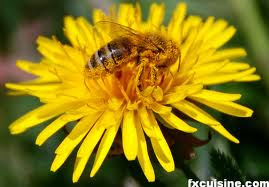 In the meantime, here is an interesting link for those of you who are interested in some amazing footage of honey hunters. Eric Tourneret has photographed beekeeping practices around the world and here is a link to his video of honey hunting in Nepal.
Posted by beaconbee at 8:04 PM