Glory to the bees!

The girls this year are good natured and healthy. I know I am probably jinxing myself, but to have made it to mid may without a sting is a testament to their kindness.

The black locust is blooming!!
For those of you who have tasted my girls' honey, this is where the spring crop comes from! This year I have finally figured out what the black locust tree looks like and am therefore noticing them everywhere. I love this phenomena that knowledge brings. Things that were there all along, but were invisible due to not knowing what they were, suddenly become visible. For instance, this morning, Sam (for the first time) read the handwritten note posted above the doorknob on the back door that says "LOCKED" and shows a horizontal line to indicate that that is the locked position. He turned to me and said "Thanks for making this note Mama!" I explained that the note had been there for years, but that he did not know how to read it until now. Anyway... back to the black locust tree.... the honey it makes is... unbelievable. Light in color, full in flavor. It is like eating a flower. They tend (I hope, I hope) to fill a box or two the last two weeks of May. Given that everything is blooming early this year, I have been keeping a careful eye on the hive and piling on the supers.

The hive came out of winter in fine shape and needed a second super by the end of April. I have been debating whether or not to follow through on my plan to split this hive so that I can regain a second hive after my winter loss. Two weeks ago they had brood up through the first super, leading me to believe that they would be booming enough to split without a problem. Today, that top super was full of nectar and the brood was all within the two deeps. I think I am best off leaving well enough alone. I will keep my eyes and ears out for a swarm to adopt, but otherwise will stick with this one (hopefully) healthy and strong hive. 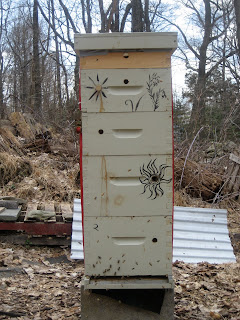 This is me bee gazing about a month ago as the girls started their spring forage in earnest. 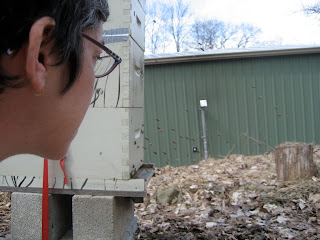 And here is a closer look at a joy flight, or play flight, or orientation flight. This occurs when the girls graduate to their last job of "forager". They will spend a few minutes hovering in front of the hive, moving up and down, up and down, getting used to the smell, sight and location of their home so that they know where to come back to after foraging far and wide. 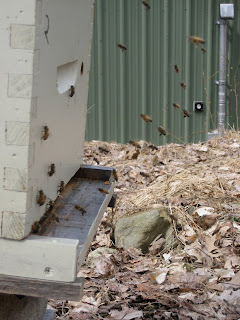 In anticipation of the upcoming flow, I added an empty super two weeks ago. This is a frame that the girls are in the process of drawing comb on. Isn't it lovely? Giving them a foundationless frame allows the girls to decide what kind of comb they want to draw, worker brood (smallest), drone brood or cells for honey storage. By next week, this will be a full frame of comb, most likely filled with nectar. 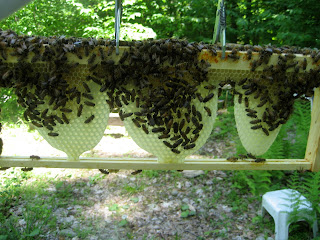 I added a third super after my last inspection. I left feeling very anxious because I was not able to see any worker brood, larvae or eggs, but I did not go very far into the brood chambers because by that time the girls had had enough of me and were getting pissy. What I did see was nicely patterned drone brood and some empty frames. My first thought was "No queen!" (a queenless hive can develop laying workers who can grow drones but not worker bees), but the empty frames could have been recently vacated by the last batch of workers, and it is natural that the queen would be making lots of drones right now, especially if there is any chance of swarming in their future. I am painfully aware that I do more harm than good whenever I go into the hive, so I will keep my fingers and toes crossed and try to let them do their work in peace.
Posted by beaconbee at 8:55 PM