Season Three, From Egg, to Honey 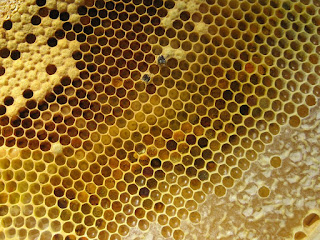 Picture of the day: this photo shows the wide range of activity that goes on inside the hive. (You may want to click on the image so that you can actually see anything). Ready? The center cells with the curled up white wormy looking things are larvae, which is the second stage of brood development. To the right of these cells are several cells containing eggs, (the first stage, and very hard to spot) which look like really small grains of rice. On the upper left edge of the photo you see capped brood, (the third stage). Just above the larvae, you can see two girls as they are popping their heads out of their cells for the first time. On the right edge you see capped honey, and just to the left of that, uncapped honey. Finally, between the uncapped honey and the larvae, you can see many cells stuffed full of pollen, in all of its glorious colors (this will be fed to the brood). 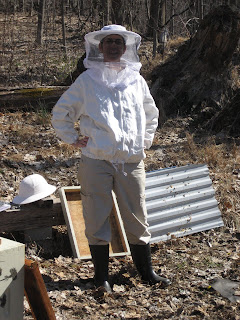 As a beekeeper, I am glad I live somewhere with four true seasons. By the end of the fall, I am ready for a rest from the hive, but by April I am missing the bees, and eager to see how they have fared over the winter. I must admit that before the first inspection of the season however, I find myself wondering just how it is that I plan on going into a wooden box housing several thousand bees and coexisting with them, if even for just a short time.
This morning, donning my new and official feeling bee jacket, I reassured myself by singing my little bee song and telling myself "Because this is what a beekeeper does, that's why."
It was a flower day, the smoker caught and stayed lit. And then the cover was off and there they were, my beautiful bees. I have seen them around a lot with the warmer days. I have tasted the pollen that they have dropped on the tray that sits under the hive, but until I saw them crawling over the frames in their vast numbers, I did not know for sure that they had made it through the long and cold winter. This hives temperament had not mellowed with the winter, and within a few minutes, they were really agitated, buzzing me and landing on my clothing and veil. I slowly relaxed as I saw the merits of my jacket and gloves. I may not look as dare-devily or as "at one with nature" as that guy who goes into his hives shirtless, but I felt calm (relatively) and remained sting free throughout.

It was a mother of an inspection, with all sorts of unexpected situations thrown my way. Here is a synopsis of what I found: The top super was still full of capped honey. I set this box on the ground without inspecting it. The top deep was loaded with capped honey as well, and also a lot of brood. I recognized the four frames of wacky comb (frames that the bees built so that one frame linked with the one next to it, making it impossible for me to remove the frames without destroying the comb.) I set this box on the ground as well so that I could see what was going on down below. The bottom deep was really light, and I remembered that it felt light in the fall as well, but that I had not been able to go through all of the frames at that time. Today I looked at them all. The first four I pulled out were empty except for brood in the upper left corner, an odd place for brood to be. The fifth frame was a plastic one that came with last year's nuc, and apparently the bees disliked this so much that they never even fully drew the comb on it. The big surprise came with the last three frames, which were covered with a layer of green mold, explaining the complete absence of bees, brood, honey, ANYTHING on them. The inside of the wood was also moldy on this half of the hive box. It's not easy to think on ones feet when surrounded by agitated bees, but I was in fact fairly prepared for the unexpected. I had brought up to the hive with me a bunch of different frames and boxes, and was able to replace both the moldy box and frames, as well as the wacky comb frames that I had to remove from the top deep. 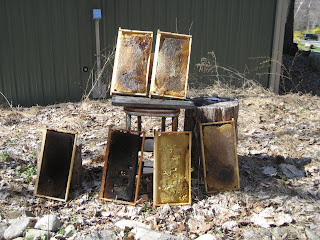 The whole process from lighting the smoker to putting the top back on took an hour. Way longer than an inspection should ideally take, but considering all that was done, I was pretty happy. This was the first time where I felt a certain level of confidence when dealing with new and complicated situations. Instead of running to the phone for advice, I considered what my options were, and what I knew from past experience and books and workshops. Of the frames that I took out, several were loaded with honey, and one was about a quarter full of brood in its various stages. While writing in my bee journal, I noticed two bees just crawling out of their cells. (which brings us back the the first photo in this post.) Poor girls being born on the wrong side of the hive wall. It is true that the hive functions as an organism, but I still wince with the death of each individual. Despite the mass murder of today, (alright, not mass, but a whole bunch did die), I know that my setting things right is what needed to be done. I will try to be more vigilant this year, not letting my fear get in the way of digging deep into the hive and knowing what is going on in there. In the meantime, I have two new deep frames of honey to harvest!

On the Beacon Bee Balm front, interest continues to grow and I plan on hitting the Farmers Markets this summer. I now have three different size tubes; lip balm size, .75oz (a slightly bigger tube that is a great purse size) and 3 ounce (the most Balm for your buck). After a morning of gloveless gardening today, I found the Bee Balm to be soooo comforting to my dirt dry hands. Looks like it is a year round product!

Next month I will get my new nuc to start my second hive with. Until then I will do what Kim Flottum from Bee Culture Magazine always says to do, "Keep my hive tool sharp and my smoker lit." 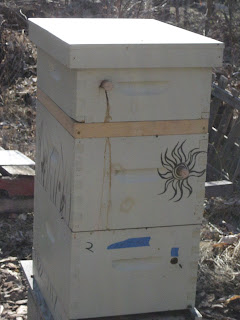 Posted by beaconbee at 8:52 PM