The Bees Have Gone Simple

I went into the house hive yesterday, expecting to find a month's worth of sweet golden honey, hoping to pull off another full box... and instead I found... dryness.
It is a stomach dropping feeling to prepare oneself to heave a 35 pound box, and find instead that it lifts off light as a feather. My arms rose too far into the air with the unexpected lightness. The next box was the same, as was the third.
(Plenty of bees though, which was reassuring at least.)
That brought me down to the top deep, which should be full of brood, pollen and uncapped nectar. I found brood, and larvae both large and small, but no nectar. Cells that did not have brood in them were bone dry. I have never seen this before. (I also found supersedure queen cells, showing that the hive either lost their last queen or found some dire need to replace her.)
I felt sick. Not for my own loss of the good and sweet stuff, but with the knowledge that fall is almost upon us, and there are a limited number of weeks before the girls will pack it in for the season. Without at least a box and a half of honey, they could starve to death.
The girls were kind, but agitated, and must have sent a message out because I simultaneously got stung on my thumb, the back of my hand and my calf. For the first time this season, they went so far as to follow me down to the house and I ended up with one girl in my studio and another in the pocket of my bee suit.
I spoke with Chris Harp who said that he is finding the same thing (lack of nectar or honey) in his hives. He attributes it in part to the unrelenting rain that we have been getting. The girls are homebound when it rains, and the heavy rain washes the pollen off of the flowers.
I find myself wondering how nature can conspire against itself in this way? I understand her not giving a toot about us humans (who have a tendency to royally mess things up for her), but her own blessed pollinators?

Luckily, I have 16 (now 15) frames of capped honey stored in the downstairs bathroom. I harvested a box in early June, (with the Black Locust flow), but saved everything else that I have pulled from the hive. I put out one of these frames this morning and by late afternoon the girls were an inch deep on it.
This is the feeding station that I set up for them. The umbrella is in case of rain (as umbrellas often are), but I also like how it makes the spot feel kind of like a hot dog stand. 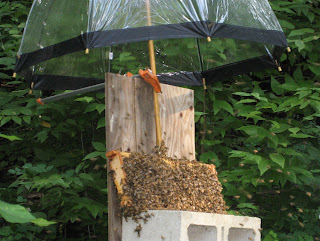 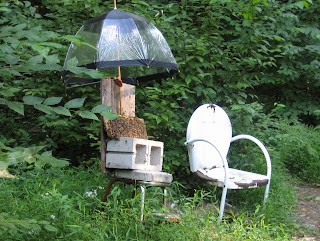 On a brighter note, this photo is of a feral hive that I found in a tree in Golden Gate Park, CA. It was conveniently located about six feet up the tree, and I was overjoyed to find it!! 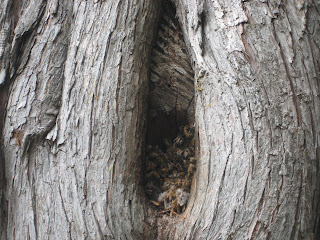 I close with a lovely poem by Mary Oliver, who has a remarkable and admirable way of finding beauty in the smallest things. Thank you Naomi for bringing this to me.

Hum
What is this dark hum among the roses?
The bees have gone simple, sipping,
that's all. What did you expect? Sophistication?
They're small creatures and they are
filling their bodies with sweetness, how could they not
moan in happiness? The little
worker bee lives, I have read, about three weeks.
Is that long? Long enough, I suppose, to understand
that life is a blessing. I have found them — haven't you? —
stopped in the very cups of the flowers, their wings
a little tattered — so much flying about, to the hive,
then out into the world, then back, and perhaps dancing,
should the task be to be a scout-sweet, dancing bee.
I think there isn't anything in this world I don't
admire. If there is, I don't know what it is. I
haven't met it yet. Nor expect to. The bee is small,
and since I wear glasses, so I can see the traffic and
read books, I have to
take them off and bend close to study and
understand what is happening. It's not hard, it's in fact
as instructive as anything I have ever studied. Plus, too,
it's love almost too fierce to endure, the bee
nuzzling like that into the blouse
of the rose. And the fragrance, and the honey, and of course
the sun, the purely pure sun, shining, all the while, over
all of us.
-Mary Oliver
Posted by beaconbee at 8:15 PM

Here is my favorite Junior Beekeeper. 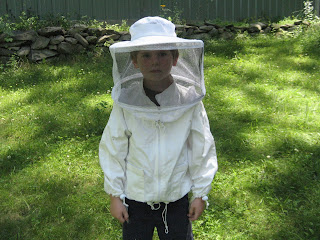 And here are a few shots of my bees visiting my flowers, a rare and sweet occurrence. When I first got bees, I was so excited to have local pollinators grooving on my flower garden, only to learn that they really like to travel. This year however, some of them have been kind enough to be true locavors. 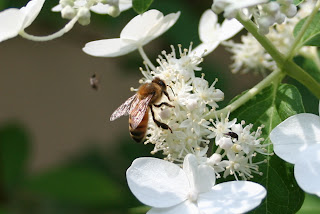 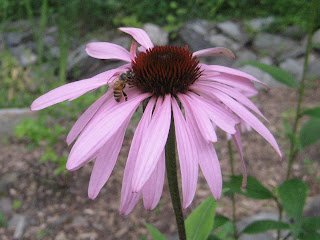 Over the first weekend of August, I attended a three day "Treatment Free Beekeeping Conference" in Leominster Massachusetts. With beekeeping, as with all agricultural pursuits, there is a wide range of beliefs about how to strike a balance between raising healthy, chemical free creatures, and dealing with the pests and diseases that threaten their existence. This conference gathered together some of the most passionate, hard-core, devoted to chemical free, beekeepers in the country and one from Sweden to boot. Imagine if you will 13 hour days of beekeepers sitting in a conference room listening to other beekeepers talking about bees. I was spellbound the entire time, not only because of the information that was seeping into my brain, but because of the devotion, ingenuity and powers of observation that these beekeepers demonstrated as they shared their years of experience. It reinforced my sense of beekeeping being a craft in which creativity, trust in yourself, and respect for the bees are key qualities, although ones not shared by all involved.
This photo introduces you (visually at least) to some of the biggies of the organic beekeeping world (as far as I know anyway). Dee Lusby holds court in the center. Dee is an Arizona beekeeper who can move a full 10 frame deep brood box as if it were filled with bubble wrap. She manages over 600 hives in the desert and produces a really unusual honey. (Chris Harp, my teacher from New Paltz is on the far left.) 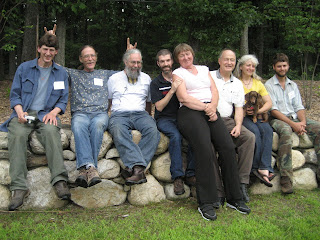 Sam Comfort is a beekeeper in the Red Hook N.Y. area who has done all sorts of crazy bee oriented things, (like working for a year for a migratory beekeeping operation earning $6.00 an hour), and he is currently raising loads of bees in Top Bar Hives, which are very different from the Langstroth vertically oriented hives that I and most beekeepers have. Top Bar Hives are horizontal in nature, and only one level high. What is wonderful about them is that the bees build all their comb off of a bar of wood, and therefor dictate the size and form of their cells. You can see this with the frame shown here. 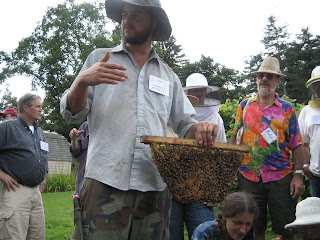 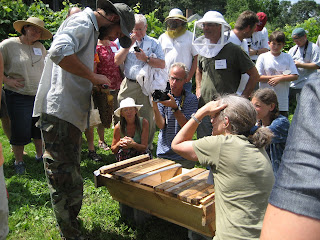 Note the queen on this frame! 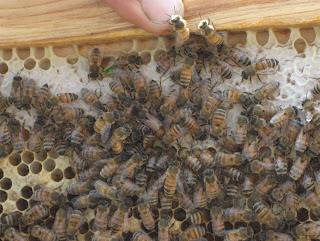 On the home front, I just peeked in today to see what is going on supply wise. I have been seeing loads of Goldenrod in bloom (about 5 weeks early this year), and Purple Loosestrife, so I expected to find at least some frames full of honey, but both hives are still working on drawing out foundation in their top boxes. I have 16 frames of capped honey in reserve (in the downstairs bathroom actually), and will not harvest any until I see what happens between now and the fall. I went in today without smoking because I just wanted to take a peek.

The Woods Hive went well, but by the time I got to the house hive, word must have gotten out and I could sense their agitation. A girl got me good on the left index finger and man did it hurt!! I am curious as to what makes some stings so much more powerful than others. Is it the age of the bee? The location? My condition? Whatever it is, this one is a doozy in terms of swelling and throbbing. But then I go up and see them doing an orientation flight and my heart swells with pride (for them) and awe. Go figure.

This final image is of Ramona (an organizer of the conference) holding a section of comb that she and her husband Dean removed from a defunct stovepipe in someone's house. 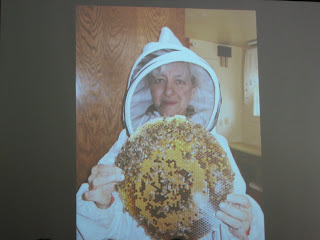 Posted by beaconbee at 8:55 PM