The House Hive and The Woods Hive 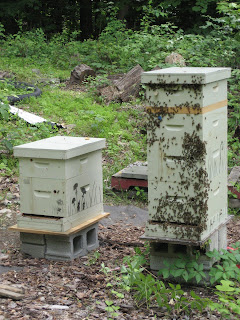 (This just in; Beacon Bee now has it's own email address, beaconbee@optonline.net)

As you can see from the above photo, I currently have two (very different) hives. The hives are named "The House Hive" and "The Woods Hive", the former being closest to the house and the later closest to the woods. The naming process was similar to the process I go through when titling a drawing or sculpture, I listen to what I am calling it in my mind.

Last year, the pissy hive was called Thor, due to its temperament, but after re-queening itself (I may have accidentally killed the pissy queen during the last inspection,) they no longer live up to the name. (Hurray!) I have learned that the temperament of the hive can change over the course of a season, depending on how well they are being treated by their care taker (removal of moldy equipment, providing adequate growing room etc.) and on the mood of their queen.

So far, The House Hive is performing above and beyond anything that I could have imagined. On May 31, I gave them a second super to fill, with frames containing undrawn foundation. I did this as a preemptive measure, thinking that they may need the space in a few weeks. In the following days, I noticed a whole lot of clumping going on in the front of the hive, even on cool days. I went back in six days later to see what might be going on and what I found was a "honey bound hive" which means that every cell of every frame was full of goods. In just FIVE DAYS these girls drew all the comb on the eight frames, filled them with honey, and capped them off with beeswax. I could not believe what I was seeing!! I put the bee excluder on between the two supers so that the bees would leave the top one, (the excluder has a special triangular exit that somehow allows the bees to leave a hive box, but not to reenter it.) Two days later I returned to find it nearly empty of bees and very much full of honey and I literally staggered back to the house with it. They continue to flourish. In the evenings, bees spill out of every entrance of the hive.

The Woods Hive however, which arrived in mid May, got off to a weak start. They arrived with a lot of mites, and I became concerned that robbing might be going on from The House Hive. In the same five days that the House Hive filled their second super with honey, The Woods Hive did not even draw any comb on their new frames. In response, I put an empty hive box above the inner cover and gave them a full frame of capped honey. To protect them from robbing, I closed down their entrance to about 1 and a half inches so that the guard bees could better protect the hive, and plugged up all of the ventilation holes. I also gave them a treatment of Oxalic acid (the same toxic compound that is naturally found in rhubarb). Three weeks later, they seem to be in better shape. Lots of pollen going in, no bees with withered wings visible, a more robust group of girls hanging around. 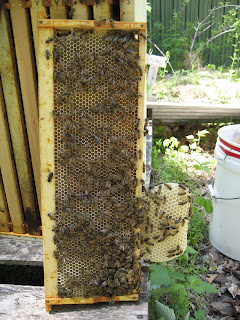 A frame from The House Hive, with a lozenge of fresh comb built hanging off of the bottom. This was due to my putting a medium sized frame in a deep box. An experiment that I won't repeat because it makes the frames harder to handle.


Due to the seemingly never ending rain that we are currently having, I have not been able to get back into the hive the past few weeks. My guess is that they are both in need of another super, which means that I have more frames to make. It is a repetitive and somewhat pleasant activity. (In case you were wondering, each frame uses a total of 15 nails of varying lengths.) I am not sure what affect the constant rain is having on the bees, but up until that, it had been a super spring for them. Reports of swarms were coming in fast and furious from friends, bee teachers and even co-workers. It's enough to give one a ray of hope about it all.

Beacon Bee Balm is now available at both DIA Beacon and Homespun Foods. I am really happy about my new fragrance, Rose Geranium, which not only smells lovely, but is also a natural tick repellent. (What more could you ask for really.)

In general, I am having trouble keeping up with everything, (parenting, job, art, garden, bees and more), but don't want to (or am not allowed to) give any of it up. Hopefully the summer will give me a chance to catch up, or at least catch my breath. 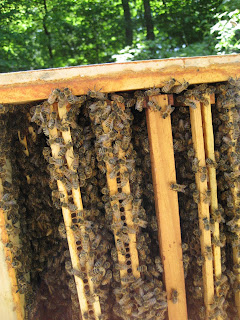 A shot from below of a super healthy and vibrant hive box.
Posted by beaconbee at 4:59 PM