Fall..... on day four of the power outage caused by the freak October 29th storm, I arrived home and took my customary glance up at the hives while collecting the mail from the mailbox. But this time, I could only see one hive. I walked up to see what was going one, and immediately saw that we had been visited, in a not so graceful manner by a bear. The "Flaming Maples" hive was on its side, with dead bees and chunks of comb all around. We had received twenty inches of snow just four days prior, and the darkness of the dead bees scattered on the white snow was stomach turning. Due to the snow, I was able to verify my hunch by the paw prints all around the hives. Were it not for the overturned hive, I might have been able to simply appreciate the overlap of our worlds, but all I could see was the destruction of the stores that the girls had worked so hard to build up over the past few months. 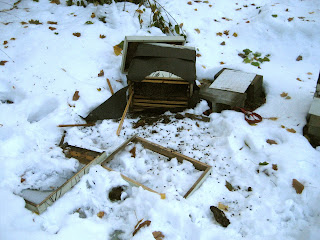 My mind was spinning. Not only was I trying to process the carnage in front of me, but I was also trying to conceive of the fact that a bear had recently been right where I was now standing. I was hit with a pang of guilt for not having strapped this hive down like the other hive. 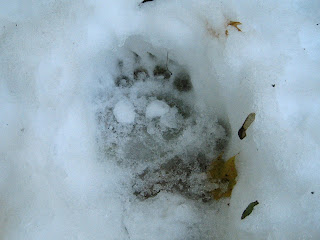 After taking a few photos and suiting up (I knew the girls would be rather pissed off), I reassembled things as best I could and tightly strapped the hive down. Looking up into the overturned hive boxes, I could see a large cluster of bees, which left me hopeful for their recovery. 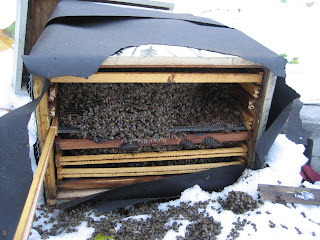 The next morning, I took a peek before heading off to work, and was shocked to see the hive once again taken apart, this time even worse than the day before, with frames of honey and comb scattered about. 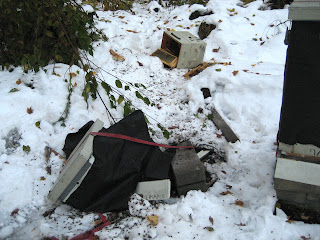 Apparently the lack of a strap had not been the issue the first time. Surveying the damage, I felt a deep sense of helplessness and frustration. Bees were scattered everywhere, full frames of honey were ripped in half, and wooden ware was torn up and scattered around. Putting the hive back together for the second time, the temperature hovering around 40, I knew the chances of the queen still being alive were slim.

By the end of the day, I had two straps lashing the hive to the two cinder blocks that sit under it, and had installed a "critter gitter" (a motion sensitive alarm, thank you Chris and Grai) along with a motion sensitive light pointed at the hives. The next morning? The hive had been knocked over, but had stayed in one piece. Kind of like "I've fallen and I can't get up." versus "I've been knocked over and had my guts ripped out."

On the next warm day, I went into the Flaming Maples to consolidate the remaining frames. I could tell from their behavior (distinctive roar, disorganized behavior) that the hive was queenless. Hopefully, they will make it through the winter and I can introduce a new queen in the early spring. My heart goes out to them.

No more bear activity for a week or so, until late one night when Matt and I heard a loud noise. We went out onto the back deck of the house and saw that one of our bird feeders, which had stood at the top of a copper pipe that came off of the deck, was now dented and lying on the deck alongside the pole that it had been attached to. Turning around, I noticed that the second bird feeder, which I had filled with seed that morning and hung in its customary spot in front of the kitchen window, was gone. I shined my flashlight on the kitchen window and saw a large, muddy paw print. It was then that we spotted the bear in the backyard, bird feeder in paw, chowing down. After watching him for awhile, we went inside but soon heard a snuffling coming from the back steps. We leaned out the back door and watched as he lumbered up the back stairs, undeterred by the flashlights shining in his eyes. Finally, as it dawned on us that this bear was indeed coming up onto our back deck, we started making enough noise for him to decide to turn around and wander off to somewhere else. 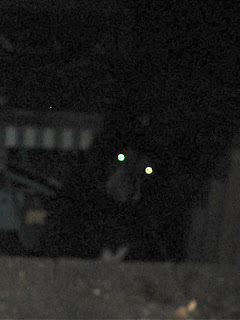 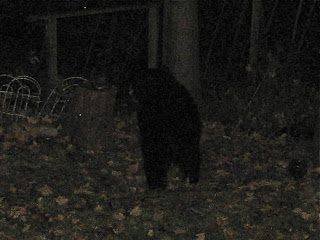 As expected, both of the hives were knocked over the next morning, but luckily neither one had been taken apart. My theory is that the "critter gitter" has a bit of a lag time before it goes off, allowing the bear to knock the hives over, but scaring/annoying him enough that he does not stick around once it starts going off. 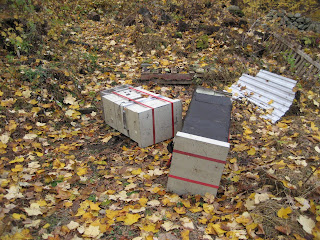 An electric fence is the only sure way to keep the bear away, but that will be a lot of work and money. For now, I am wishing him away and hoping that he has just been passing through and will relocate himself. Feel free to wish along with me.
Posted by beaconbee at 9:45 PM